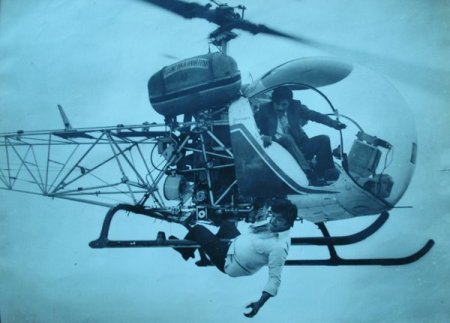 His real name was Krishnan Nair , better known by his stage name Jayan, was a retired Indian Navy soldier who attained considerable popularity as an Malayalee Indian film actor. Malayalam movies witnessed a new trend in acting in the late 70s. With majestic, commanding voice and clear distinct comverstion style, the heart throb of Malayali audience who shot to immediate fame was none other than Jayan. Breathtaking action scenes, tight and risky stunts and fiery dialogues of Jayan truly made watching the film a thrilling experience, but Keralites had a rude shock when news broke that Jayan was crushed under a chopper that accidentally hit the ground while shooting the film ‘Kolilakkam’ at Cholavaram. Jayan was hanging down from the landing bars of the chopper by rejecting the director’s offer for a dupe. He was killed instantly.

The name “Jayan” was given to him by Jose Prakash, a noted villain actor of yesteryear Malayalam cinema. Jayan started his career by acting in minor roles. His first film was Shapa Moksham (1974). Jayan got his first major break with Thacholi Ambu (1978) in which he acted as a co-hero. What made Jayan a superstar was his negative hero role in Sarapanjaram (1979). He catapulted to fame riding on machismo roles that endeared him to the masses, and he established himself as one of the most popular Malayalam film actors of his time. He is touted as the first action hero in Malayalam cinema.

On 16 November 1980, Jayan was killed in an accident on the set of the movie Kolilakkam. The climax scene of the movie was being filmed in Sholavaram, near Chennai, Tamil Nadu. He was 42 then and at the peak of his popularity. Jayan always performed his own stunts, and for this movie he was performing a particularly dangerous stunt that involved him boarding an airborne helicopter from a moving motorbike. The shot was accepted by the director in the first take; altogether three shots were filmed.Movies exploited Jayan’s masculine physique and he appeared barechested in numerous scenes. His onscreen attire (most famously his Elvis bellbottoms), his masculine image and the nature of his death turned him into something of a legend in Kerala. Jayan was also known for his unique method of dialogue delivery and he has contributed many memorable lines to Malayalam film history.

According to the film’s production executive, Jayan insisted on yet another re-take as he was not satisfied with its perfection. During the re-take, the helicopter lost its balance and crashed along with Jayan, who later succumbed to his injuries. Watch his last climax scene which ended his life